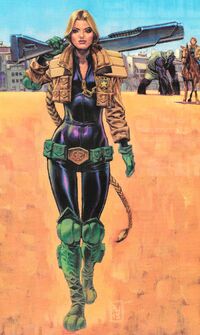 Zia Freely, also known as Metta Lawson, is a character from the Judge Dredd Megazine strips Insurrection and Lawless. She describes herself as "Judge-born and Judge-raised" (see quotes), so she was probably created by Justice Department's cloning programme in Mega-City One and indoctrinated by the Academy of Law as soon as she emerged from her cloning tank. As an adult Judge, Freely was sent to the colony world of K Alpha 61 (an important asset to Mega-City One, which received regular shipments of its minerals) to act as a colonial marshal alongside Marshal Lomax and Senior Marshal Karel Luther.

In 2128 AD, K Alpha 61 was attacked and occupied by an aggressive alien species known as the Zhind, who wanted to expand their territory and claim ownership of the colony's mineral deposits. Luther asked Mega-City One to send help twenty-three times, but no help was forthcoming. After two years of war the colony eventually fought off the Zhind and liberated itself with the help of its mutant, droid and uplift (intellectually enhanced ape) populations. These three types of people were previously seen as despised slave castes, but Luther granted them full citizenship so they could fight the Zhind shoulder to shoulder with the humans, as equals.

After the hostilities had ceased, K Alpha 61 was instructed to disenfranchise its new citizens. Luther was incensed and arranged for the colony to hold a referendum on whether or not it should claim independence from Mega-City One. The 'yes' vote won, and K Alpha 61 declared independence and renamed itself Liberty on July 4th, 2130. Freely had been opposed to secession, but was happy to abide by the result of the vote.

Justice Department responded by sending SJS ships to attack the colony. Luther refused to surrender even when heavy civilian casualties were sustained, which made Freely uneasy: "the moral high ground doesn't seem so attractive now it's under fire."1 After fierce fighting in which Marshal Lomax was killed, Freely gave herself up to the SJS. She was taken to the bridge of their flagship, from where she sent Luther an emotional plea to admit defeat.

However, Freely's apparent defection was in fact a ruse to get her close to the SJS' command centre, as she revealed to Luther in a recorded message handed to him by his friend, the uplift Simeon. The plan was for Luther to pretend to surrender, which would be the signal for Freely to switch on the ECM scrambler she had hidden in a fake tooth. This would disable the SJS' computer systems, giving Luther and the surviving insurrectionists enough time to flee from Liberty in a spaceship and take the fight for self-determination to other colonies.

Freely was detained in the Justice Department detention and processing facility 'Elizabeth Fry', orbiting colony world J Beta 12, for two years, her periods in solitary confinement punctuated by regular interrogation sessions. Any lingering loyalty she felt towards Justice Department appears to have been erased from her mind by her treatment. The SJS were under pressure to send her to Titan, but the decision was taken out of their hands when Freely was rescued in 2132 AD by a team of uplifts led by Simeon.

The uplifts took Freely to Production Venue 33, an entirely automated manufacturing world with a population of over six millions droids that was the insurrectionists' new base. Freely said that they should rename it Fraternity: "It's about more than the liberty of one world now. It's about colonies standing together. All types of colonists standing together."2 What Freely didn't know was that a Psi-Judge on the 'Elizabeth Fry' had allowed her to escape so that she would lead the SJS to Luther.

Having followed Freely to Fraternity, the SJS (led by Laud, a Judge whom Freely had known at the Academy of Law) mounted an attack on it. The rebels spent seven months fighting a guerrilla war in the nooks and crannies of the huge factory, led for a while by Freely after Luther sustained serious injuries in combat. All of Fraternity's droids were upgraded with a 'free will' programme that meant they were no longer compelled to obey the orders of humans. Luther and Freely eventually gave the SJS an ultimatum: leave Fraternity, or they would unleash a computer virus on Mega-City One's 'trilinear chips', vital parts of its computer infrastructure, and send the city back to the nineteenth century. Laud pleaded with them not to impede the advancement of the human race, and revealed that the reason K Alpha 61 hadn't been helped to fight off the Zhind was because Mega-City One was at a precarious place in its interstellar expansion and didn't have the resources to start a war with an advanced alien species.

Rather than back down, the SJS summoned extra troops to mount an attack on Fraternity, as it now represented a direct threat to the safety and security of Mega-City One. This meant that troops were diverted from defending an idyllic colony called Gateway from a Zhind attack. Some of Gateway's fleet defied their orders, turned round and tried to defend Gateway, both in orbit and on the ground, but they were ultimately unsuccessful. Nevertheless, their disobedience meant that the SJS didn't have enough firepower to destroy Fraternity before the insurrectionists could flee to a new hideout.

The rebels' final headquarters was on an icy, rocky world not much bigger than a moon, officially known as Oryx 18. They renamed it Equality, and were joined there by the Gateway ships that had defied the SJS and now were on the run from Justice Department themselves. A colonial marshal from Gateway, Willard Gallows, betrayed the rebels' position to the SJS, who destroyed the base on Equality. Gallows later realised that he had committed this betrayal because of conditioning that the Zhind had implanted in his brain after they had gravely injured him on Gateway, alongside a mental block which meant he couldn't tell anyone about it. The conditioning was aimed at making Gallows cause the death of Karel Luther, the only human who had ever beaten them in combat.

Realising that the Zhind attack on Gateway presaged an all-out war between humanity and the Zhind, whether Justice Department wanted one or not, Luther offered to help the SJS fight the Zhind if they would grant the insurrectionists what they wanted when the interspecies war was over. Laud agreed on behalf of the SJS.

The war with the Zhind lasted for sixteen weeks. Its most crucial battle was fought on the colony world of 43 Rega, where humanity had one last chance to stop the Zhind before they could advance to the solar system containing Earth. To defeat the Zhind, the humans needed to take the command node on Hill 719. Laud knew that the attack on Hill 719 would cost a great many lives, so he ordered the insurrectionists to spearhead it. Luther was killed in the initial charge. This freed Gallows from his Zhind conditioning, and he used the knowledge it had given him of Zhind tactics to ensure that Hill 719 was taken and the alien menace was defeated.

Once he knew that humanity was safe, Laud ordered the SJS to kill all the insurrectionists. Freely was so enraged by this that she ran screaming and firing at the SJS forces, but was hit by a bomb and apparently killed. The uplift Simeon placed her body gently to one side before attacking the SJS himself and being gunned down. Nearly all of the rebel forces were slain by the SJS. The insurrection was over.

The series Lawless takes place on 43 Rega and began five years after the war with the Zhind ended. Its protagonist is Colonial Marshal Metta Lawson, who was apparently sent to 43 Rega from Mega-City One to bring law and order to the town of Badrock (population 986). Flippant, undisciplined and fond of a drink, Lawson came as a shock to the town's worthies, but proved adept at breaking up fights and calming tensions without causing death or serious injury.

Lawson's predecessor, Colonial Marshal Hetch, was a former Psi-Judge who unfortunately went insane and murdered several people three months after arriving in Badrock, and had been imprisoned in the town's lock-up ever since. This was partly because Badrock was built over a seam of fullminarite crystal, which was mined by muties, robots and uplifts. Fullminarite was a vital component of spaceships but also amplified psionic auras — and the muties, robots, uplifts and various human factions kept arguing and fighting with each other. Their distrust and aggression was reflected and intensified by the mineral beneath them, giving the town its name: Badrock.

Lawson seemed to take her job seriously despite her attitude, and her rather curious reluctance to use her Lawgiver, but Hetch, whom she visited shortly after her arrival, detected with his mind powers that she was not precisely who or what she said she was. It was later made apparent to the readers, but not to most of the citizens, that Lawson was in fact Zia Freely, who had survived her final battle with the SJS. She couldn't use her Lawgiver because it belonged to the real Lawson, and if a non-authorised person attempted to use it then it would explode and blow her hand off. Aided by her clerk, Nerys Pettifer, 'Lawson' began bringing justice and civic harmony to Badrock. This earned her the enmity of Munce, Inc., a powerful corporation with an iron grip on the town.

The reason why readers didn't guess Lawson's real identity until it was spelled out to them by 43 Rega's population of telepathic natives, who are severely discriminated against by all of the colonialists, was because Zia Freely appears to have undergone a dramatic personality change: she is now very fond of sex and alcohol, neither of which she showed the slightest bit of interest in before; she does what works rather than what the Justice Department regulations dictate; she swears; she has a lively sense of humour; she breezes through life without giving a single drokk; and she talks like a Wild West cowboy or saloon barmaid from nineteenth-century Arizona. The rest of her personality changes can be explained by post-war trauma coupled with the desire to conceal her identity, but a lot of people in Badrock talk in the way she does. This may be caused in some way by the fullminarite and/or the native telepaths somehow tapping into the human race's subconscious conception of the Wild West (influenced, of course, by movies), and the feeling of Badrock's inhabitants that they are replicating the experiences of those who lived in Wild West frontier towns in the past.

Freely/Lawson eventually freed Badrock from the control of Munce, Inc. and had it declared a free trading settlement under the protection of Justice Department.

If Justice Department ever finds out who she really is, she's toast.

According to Wikipedia, 'metta' is a religious concept from Buddhism, Hinduism and Jainism. It means "benevolence, loving-kindness, friendliness, amity, goodwill and active interest in others."

Retrieved from "https://britishcomics.fandom.com/wiki/Zia_Freely?oldid=144801"
Community content is available under CC-BY-SA unless otherwise noted.