The X-Men, Marvel's band of misunderstood mutant superheroes created by Stan Lee and Jack Kirby, first appeared in British comics in the pages of the Odhams title Fantastic (one of the "Power Comics" line) in the late 1960s, in reprints of the early sixties series featuring the team's original line-up, Cyclops, Marvel Girl, Angel, Iceman, the Beast and their mentor Professor X. They also appeared in all three Fantastic Annual's (1968-70).

The X-Men also featured in the reprint titles licensed by Alan Class until the arrival of Marvel UK.

They were introduced to readers of the then only recently established Marvel UK line in 1973 Mighty World of Marvel Vol 1 49, though their stay in that title was brief; they later found a longer lasting home in the pages of The Super-Heroes, which in keeping with Marvel UK's standard practice at the time, continued the series from the point at which the MWOM run left off. Following the eventual cancellation of The Super-Heroes, the team briefly transferred to the pages of The Titans and then Super Spider-Man and the Titans Vol 1 before disappearing for a time, though they would resume their ongoing adventures in the pages of the revamped MWOM (now titled Marvel Comic) in 1979. The original run was finally completed, several years after it had begun, in the pages of Marvel Super-Heroes Monthly (the yet again retitled MWOM, now changed from weekly to monthly frequency) in the early 1980s, with several of the last few issues (penciled by Neal Adams) later reprinted in two volumes of the X-Men Collectors Edition and with the team's origin reprinted agan in the 1980 Marvel Super-Heroes Annual Vol 1 1. The series would begin to be reprinted once again from the beginning in Star Heroes Pocketbook, which was renamed X-Men Pocketbook with issue #11 (the X-Men having replaced the Micronauts as the lead feature in #10). The title was cancelled with #28 in August 1982, but on 27th April 1983 the original team returned for a third reprint run, again starting from the beginning, in a weekly titled simply The Original X-Men. This lasted 17 issues before merging with The Mighty Thor weekly with issue #20, which became Thor and X-Men for the remainder of its 39 issue run and then merged with Spider-Man. A brief mid eighties run in the pages of Spider-Man concluded the original X-Men's lengthy tenure at Marvel UK.

In the meantime, the revamped All-New X-men (originally consisting of Cyclops, Storm, Wolverine, Nightcrawler, Colossus, Banshee, Thunderbird and Sunfire, later joined by others including Kitty Pryde, Rogue, Gambit, Dazzler and Psylocke) made their Marvel UK debut in the eighth issue of Rampage Monthly in February 1979 (the new team had actually debuted in America in 1975), and remained there until the title's cancellation with #54 in December 1982, after which the strip transferred (midway through the classic Dark Phoenix storyline) to Marvel Super-Heroes Monthly for that title's last few issues, and then to the lead slot in the relaunched Mighty World of Marvel, now a monthly (during the early eighties, there were also two X-Men Winter Special's published, in 1981 and 1982). Their stay in MWOM was brief, the strip ending halfway through a storyline in issue #6 as from issue #7 the title incorporated The Daredevils and the X-Men were ousted in favour of finding a new home for the dispossessed Captain Britain. This ended the ongoing reprint series. Some X-Men stories from several years later would be reprinted in Marvel Super-Heroes Secret Wars fortnightly (though by this time, Marvel UK' former practice of reprinting pretty much all of an ongoing strip in chronological order even across several titles had been abandoned so large sections of the X-Men's continuity were missed out, making it a somewhat disjointed reading experience for some readers; characters were now on the team whose introductions to it were never reprinted in Britain, for one thing-including Magneto, who had previously been their arch enemy!), and a second (this time bi-weekly) comic titled just X-Men and featuring reprints of the 1990s series was launched in 1994 but quickly failed.

Since the dissolution of Marvel UK, the licence to reprint Marvel Comics in Britain has been held by Panini, who count the long running Essential X-Men among their ongoing "Collector's Edition" series, and also briefly published an Ultimate X-Men title featuring alternate universe versions of the characters.

A number of X-Men Annuals have also been published over the years by several publishers including Marvel UK and Panini. In addition, there have been a couple of Wolverine Annuals starring the team's most popular member.

Mutants, gathered together by Professor Charles Xavier to protect a world that hates and fears them. Because, y'know, that's what heroes do. The original X-Men were just five gifted individuals, Cyclops, Marvel Girl, Angel, Beast and Iceman, but several others joined during the 1960s and an almost entirely new team including Wolverine, Storm, Colossus, Banshee and Nightcrawler arrived in 1975. They haven't looked back since. 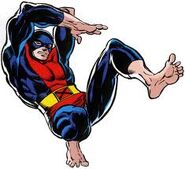 The Phoenix (cosmic force in the form of Jean Grey) 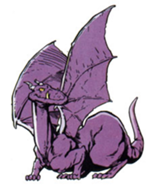 The late 1980s team, with a surprise guest 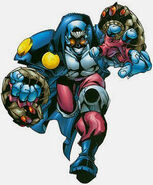 Retrieved from "https://britishcomics.fandom.com/wiki/X-Men?oldid=142851"
Community content is available under CC-BY-SA unless otherwise noted.