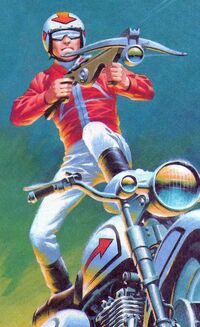 X-Bow was a crusading vigilante, presumably of independent means, although nothing about his personal life or true identity was ever revealed. He rode around the British Isles (and later, briefly, America) on a high-powered motorcycle, dispensing justice with the aid of a customised crossbow (presumably his own invention) which fired a variety of tricked-up bolts including ones containing stun and gas capsules, signal flares, homing devices, bugging microphones, grappling hooks (which he could use to haul himself up) and double bolts which could release a net over a fleeing quarry. He also later obtained a shield made of a special bulletproof alloy, though where he got it is unclear.

Riding a motorcycle, firing a crossbow and carrying a shield at the same time.

Retrieved from "https://britishcomics.fandom.com/wiki/X-Bow?oldid=77160"
Community content is available under CC-BY-SA unless otherwise noted.