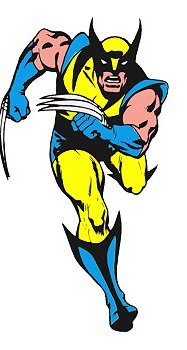 James Howlett, also known as Logan, but better known as Wolverine, is a Canadian mutant superhero once used as an agent by the sinister Weapon X project, and a member in long standing of the heroic X-Men. He has also been a member of the Avengers.

Created by Marvel Comics, he has featured in a number of British reprint titles, with and without the rest of his teammates, including the Wolverine Annuals. He also featured in a UK originated six page story first printed in Marvel Comic Vol 1 335. in which he teamed up with Hercules.

Rapid healing, often to a truly ridiculous degree (this also greatly retards his ageing processes; Wolverine is over a hundred years old, but only looks about forty).

Being the best there is at what he does

Retrieved from "https://britishcomics.fandom.com/wiki/Wolverine?oldid=149269"
Community content is available under CC-BY-SA unless otherwise noted.