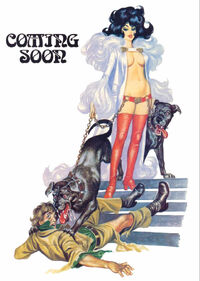 Wanda Von Kreesus was a man-hating lesbian heiress to a fortune, left to her by her degenerate multi-millionaire father (whose death Wanda engineered by having her 16 year old nymphette girlfriend Candyfloss get him to chase her around until he died of exhaustion). From her schloss on Lake Zurich, Switzerland, Wanda, her resident egghead Homer Sapiens (a masochistic mad scientist) and her paramilitary 'Puss Force', the PIF (an all female private army led by General German Grrr) plotted world domination purely for Wanda's entertainment. Wanda owned a bank, and her safe contained secrets that could topple governments should the mood take her.

Wanda has no weaknesses.

Yes. Lots of them.

Retrieved from "https://britishcomics.fandom.com/wiki/Wanda_Von_Kreesus?oldid=141007"
Community content is available under CC-BY-SA unless otherwise noted.