Start a Wiki
Walter the Wobot 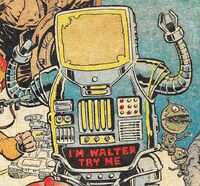 Walter the Wobot is a character from 2000 AD and the Judge Dredd Megazine. A sickeningly obsequious robo-servant from Mega-City One, he was the first robot ever to be granted his freedom (by Chief Judge Goodman, in return for helping defeat the insane robot Call-Me-Kenneth). However, Walter had no use for freedom; all he wanted was to serve his hero Judge Dredd, who duly took him on. Walter spent several eventful years in Dredd's service, during which he was made Mega-City One's first ever robot Judge by Chief Judge Caligula (who was insane, so it probably wasn't legal) and saved Dredd's life during the Apocalypse War. Walter eventually left Dredd after being seriously damaged by the villainous Mean Angel and went on to set up his own business selling used robots, something Dredd considered morally dubious.

Still obsessed with Dredd, Walter eventually snapped and tried to kill Dredd for his dismissive treatment over the years. He was sentenced to thirty years' imprisonment but was released during a robot revolution. Surrendering to Dredd in the aftermath, he was paroled and now lives with and cares for Mrs. Gunderson, former landlady of Judge Death.

Making synthi-caff; filming events and replaying them on his screen.

Not a very good cook. He put a bedsock in Mrs Gunderson's omelette.

A readers' favourite, Walter once had his own intermittent series of short, comedic adventures entitled Walter the Wobot: Fwiend of Dwedd.

Retrieved from "https://britishcomics.fandom.com/wiki/Walter_the_Wobot?oldid=89156"
Community content is available under CC-BY-SA unless otherwise noted.