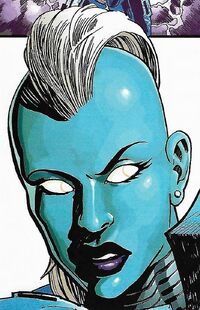 Venus Bluegenes was a supporting character in the 2000 AD strip Rogue Trooper, who later became the eponymous protagonist of her own strip. A so-called G.I. Doll, she was one of the female counterparts of the Genetic Infantrymen created by Milli-Com to fight the war on Nu Earth. Like the other Dolls, Venus originally had a non-combat role at Milli-Com, but was frequently subjected to unwanted attention from her human male superiors.

The G.I. Helm carried a torch for Venus and once attacked an officer to basically save her from being raped, but his buddy Rogue switched places with him to save him from a reprimand. In return Venus, who had no feelings for Helm but cared for Rogue, left him a note in the capsule that was due to drop him on Nu Earth and also arranged extra shock protection for the capsule. This added protection saved Rogue when all the other male G.I.s were killed making the drop in what became known as the Quartz Zone Massacre.

Rogue met Venus again on Caliban Island. She was dropped there with a bunch of normal humans from Milli-Com, but because there were only enough rations for one person she murdered the others, reasoning that she was a superior life-form who had more right to live than they did (see quotes). Although this was wrong, Milli-Com must bear some of the blame for creating her to be a weapon of war, and her creators shouldn't have been surprised when she took war-philosophy to its logical conclusion.

Years later, Venus joined Rogue's squad and was with them when most of them were apparently killed shortly after meeting the second generation G.I. named Friday. Venus became Friday's travelling companion, along the way inheriting the rifle containing the biochipped personality engrams of the mentally unstable G.I. named Eightball, who believed she was his mother.

Among the people to have worked on Venus' strip are:

Venus is named after a 1962 pop song, 'Venus in Blue Genes', by Jack Keller (no, not that one) and Howard Greenfield.

Retrieved from "https://britishcomics.fandom.com/wiki/Venus_Bluegenes?oldid=91314"
Community content is available under CC-BY-SA unless otherwise noted.