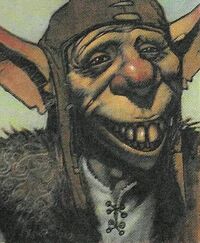 Ukko is a dwarf who for many years has acted as servant, companion, official chronicler and sometime business manager of Sláine, who won him in a board game called 'wooden wisdom'. He is obsessed with money, carnal gratification and duplicity for its own sake and is totally untrustworthy. But he is Sláine's oldest friend...

Despite being utterly venal, Ukko has assisted Sláine on a number of occasions. For instance, he was at his side when they fulfilled Myrddin's command to defeat the alien Cythrons, their leader the Guledig and their god Grimnismal, who were harvesting humanity's negative emotions. Fortunately Ukko and Sláine were accompanied by brawny heroes such as Mogrooth, Tlachtga and Calgacus, who all died in a variety of interesting ways while Ukko was left unscathed.

Claims to be "immune to curses" as a result of Sláine cursing him so many times.

Whatever Sláine is using at the time, e.g. The Knucker or Pluke. Has also been known to ride a pig.

Because he is a thief, Sláine beats Ukko every week: "That way he never gets away with stealing." Ukko doesn't appear to hold it against him. Sláine never actually stops him stealing, so in a way theirs is the perfect friendship, as Ukko enjoys petty larceny and Sláine is very fond of administering violence.

Retrieved from "https://britishcomics.fandom.com/wiki/Ukko?oldid=82762"
Community content is available under CC-BY-SA unless otherwise noted.