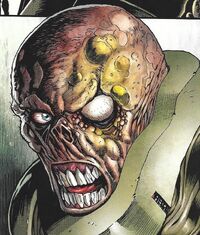 The Traitor General is a character from the 2000 AD series Rogue Trooper and Hunted. He was a Souther military commander who believed that the Southers should stop their galaxy-wide war of attrition with the Norts so that all of humanity could band together and fight alien species, whom he saw as the real threat, under strong Nort leadership. His superiors responded by demoting him, putting him in charge of the war on a single planet, Nu Earth, which had been so badly damaged by chemical weapons that no normal human could survive there without protective clothing.

In retaliation, the Traitor General gave the Norts information about the Southers' groundbreaking 'Genetic Infantryman' programme, which had elite blue-skinned super-soldiers who could survive in the toxic air of Nu Earth without wearing chem-suits. This lead to almost all of the Genetic Infantryman, or GIs, being massacred by Norts at the Quartz Zone. The only surviving GI was Rogue, who slotted the biochips containing the personalities of three of his dead comrades — Helm, Gunnar and Bagman — into his equipment. He then embarked on a long and arduous quest to find the Traitor General and bring him to justice.

The Traitor General was well aware of his pursuer, and that he had earned the enmity of both sides in the war, who each wanted him dead for their own reasons. At one point, he made a deal with the alien criminal cartel known as the Xianta, offering to trade them the Rogue Trooper in return for giving him a new face (his original one having been burned away when a pod he was in came down in flames), a new identity and a fortune on which to retire in luxury. This plan fell through when Rogue escaped the Traitor's trap — partly because the Norts, who were disgusted by the Traitor's double-dealing even though it had benefited them, had sent a squad of soldiers after him (one of whom was Atalia Jaegir). Most of the Norts survived just long enough to mess up the Traitor General's cunning plan before, as is the tradition for Norts on Nu Earth, dying noisily. The Traitor General himself fled in an aircraft.

The Traitor General had suffered severe burns over much of his body, which he refused to have properly treated as he felt the constant pain kept him sharp. In other words, he was absolutely barking.

Retrieved from "https://britishcomics.fandom.com/wiki/Traitor_General?oldid=102819"
Community content is available under CC-BY-SA unless otherwise noted.