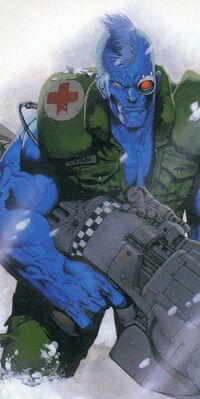 Tor Cyan is a regular character in the 2000 AD strip Mercy Heights, who later became the eponymous protagonist of his own strip. He was a genetically engineered life-form of indeterminate age who worked as the pilot of a medical shuttle attached to the Mercy Heights space hospital. Cyan's past was a mystery to his co-workers, aside from the knowledge that he was effectively a relic of a long-forgotten galactic war.

The truth about Cyan began to emerge when he visited the planet of Nu Earth, which had become a planet-wide war memorial covered in blue poppies. After reviewing the life history of the man known as the Rogue Trooper, Cyan placed a mangled biochip bearing the number 4 and the legend 'Rogue' inside a gigantic hollow obelisk commemorating the dead Norts and Southers who had perished in the war. Cyan, it later transpired, had been cloned by an alien creature from DNA taken from the remains of the Rogue Trooper himself following his death in an explosion in space. It remains unclear if Cyan actually was in some way a revived Rogue, or had any memory of 'his' former life.

Able to exist in conditions which would kill a human being, including subzero temperatures and toxic atmospheres.

Among the artists to have drawn the Tor Cyan strip are Colin Wilson and Jock.

Retrieved from "https://britishcomics.fandom.com/wiki/Tor_Cyan?oldid=82724"
Community content is available under CC-BY-SA unless otherwise noted.