Start a Wiki
Tom Frame (1931 to 2006) was a letterer working in British comics. He created dialogue for the majority of the Judge Dredd strips published during the character's first thirty years as well as over 300 other stories in 2000 AD and in Marvel UK's Transformers. He worked on more 2000 AD strips than any other creator. Frame used a combination of old-fashioned tried-and-trusted hand-lettering techniques and often experimental computer-based techniques including a font based on his own hand-drawn lettering. After his death from cancer on 14th July 2006, 2000 AD prog 1508 included a centrepiece tribute to him with art contributed by 37 artists and two colourists, including a drawing by Frame's grandson. He is acknowledged by several other letterers, including Richard Starkings, as having helped them get started in the profession. 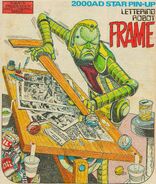 From 2000 AD prog 291, by Robin Smith
Add a photo to this gallery
Retrieved from "https://britishcomics.fandom.com/wiki/Tom_Frame?oldid=64064"
Community content is available under CC-BY-SA unless otherwise noted.