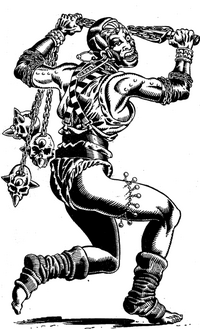 Tlachtga is a character from the 2000 AD strip Sláine. She was an Atlantean warrior and daughter of the dragon rider Mogrooth. She led a squad of warriors and protected the land of the wizard Myrddin. Most of her squad were killed however when the city was attacked by the worm god Crom-Cruach. Sláine managed to rescue Tlachtga but not before half her face had been disfigured by the time worm's rays.

She accompanied her father and Sláine when they entered the Tomb of the Dark God Grimnismal (alongside Calgacus, Nest, Oeahoo and Ukko). While there she fought against a combination of Cythrons, Diluvials and Orgots. As time passed she grew jealous of Nest for her pretty looks.

Feeling despair about what had happened to her face, she wandered from the group only to encounter the colossal dragon Nidhug. She initially got ready to attack but the dragon put a glamour on her making her see herself as beautiful again, and she willingly went into Nidhug's arms as Sláine and Mogrooth went in to fight it. Sadly they were too late and Tlachtga was devoured. At least she died happy.

Very fast and agile; seems to be competent with several weapon types.

Retrieved from "https://britishcomics.fandom.com/wiki/Tlachtga?oldid=65389"
Community content is available under CC-BY-SA unless otherwise noted.