The (usually) full colour strip (the black and white panel above is from the 1981 Starlord Annual) concerned a group of 'Time Control' agents based in Earth's prehistory but originally founded in the fortieth century, whose job was to police the timelines to ensure that time criminals didn't screw up history, and that their arch-foes the alien Droon from Rigel didn't use history as a beachhead from which to attack Earth. The first story in the comic featured the Droon, but the next two stories were all about Time Control clearing up alterations to the timelines that they themselves had made through corporate negligence. This was presumably because the strip's writers and/or editors realised that the Droon, who resembled giant green frogs with fangs, were silly.

The members of Time Control were recruited from different points in history, with the main characters in the strip being former steamer captain James Blocker (from 1978, naturally) and shape-shifting Haniken Princess Suzi Cho, as well as their boss, Harl Vinda. Timequake did not initially survive the cancellation of Starlord, but it did resurface for a brief run in 2000 AD (drawn by Jesús Redondo) several months later. 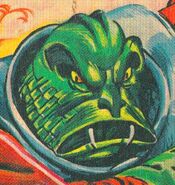 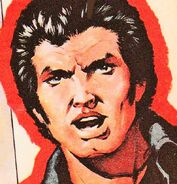 Suzi Cho
Add a photo to this gallery
Retrieved from "https://britishcomics.fandom.com/wiki/Timequake?oldid=89309"
Community content is available under CC-BY-SA unless otherwise noted.