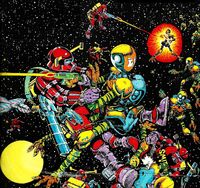 The V.C.s (or "Vacuum Cleaners") were a squad of spacefaring commandos from the various colonised planets of the Earth's solar system in the year 2531 AD, who were tasked with fighting the Geeks, a hostile alien race intent on conquest. The original squad consisted of Jupe (the sergeant), Hen-Sho (the missile man), Ringer (the pilot), the mutant Dwarf Star (the port gunner) and the mentally unstable Loon (the starboard gunner), supported by a ship's computer called Brother. They were joined by Steve Smith, the only V.C. actually born on Earth, something which provoked resentment from his comrades (particularly Ringer) who nicknamed him "Earthworm".

The squad were generally hated by their superiors (in particular "the Dishwasher", a senior member of the Diplomatic Corps) because of their undisciplined ways, and received little support from them in their mission. In fact, the Dishwasher's attempts to get rid of them by sending them on a number of insanely ill-advised missions eventually caused the deaths of Dwarf Star, Hen-Sho and Loon, and resulted in Jupe being blinded and Ringer driven insane. Ringer finally decapitated him after discovering he had sold out to the Geeks. Despite all this, however, the surviving V.C.s (Smith and Jupe) eventually succeeded in ending the war by destroying Geek High Command with the assistance of the cyborg General Moore and the ghosts of their dead comrades (who might just have been the result of Smith hallucinating because of blood loss, but were still freakin' awesome).

Years later, Smith (now a Major) rejoined the army to lead a new squad of V.C.s comprising Kali (the pilot), Ronsalle (the missile man), Diderot (who replaced Ronsalle when he died), Lin-Fu (the turret gunner), Ryx (the starboard gunner) and the Geek Keege (the port gunner) when hostilities broke out again thanks to the manipulative actions of the alien alliance called the Polity (who also turned out to have been behind the first Geek war). They were later joined by starboard gunner Tommy Hoff (Ryx switched to main gunner) and missile man Tycho (because Diderot had to leave the V.C.s when he discovered that he was a robot).

Spacesuits with their names on.