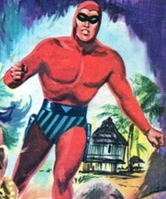 Kit Walker is the latest in a long line of hereditary Phantoms who have fought crime and injustice in West Africa for 200 years while convincing superstitious locals and criminals that they are, in fact, a supernatural being: the legendary 'Ghost Who Walks'. The Phantom is based in the hidden Cave of Skulls.

The Phantom started life in the 1930s as an American newspaper strip character but his adventures have proved rather more popular in Europe and Australia than in his native country. Phantom stories have been published in Britain by numerous publishers over the years, including World Distributors and Wolf Publishing. He also featured in TV Tornado and in Marvel UK's Defenders of the Earth.

The Phantom is a strong contender for the title of first ever costumed superhero.

Retrieved from "https://britishcomics.fandom.com/wiki/The_Phantom?oldid=114469"
Community content is available under CC-BY-SA unless otherwise noted.