Start a Wiki
The Leopard 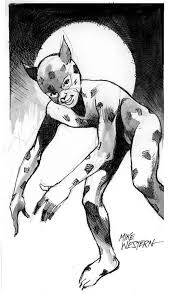 The Leopard from Lime Street is a comic strip from the pages of Buster. Its hero, Billy Farmer, was a thirteen-year-old orphan living with his Aunt Joan and Uncle Charlie on Lime Street in the town of Selbridge.

In a rather unlikely (and not wholly original) turn of events, Billy gained superhuman strength, speed, reflexes and tree-climbing abilities (!) after being scratched by a radioactive leopard called Sheba while taking photos at Professor Jarman's experimental zoo for his school magazine. Naturally, he immediately customised and donned a leopard-like costume left over from when he starred as the cat in his school's production of Dick Whittington and began fighting crime, of which Selbridge had a surprising amount. In another not entirely unexpected twist, Billy also sold photos of his alter ego to the local paper in order to help support his frail aunt! (Sadly, unlike the uncle in Spider-Man, Billy's uncle was not a saintly old dead bloke, but an unfortunately living, violent, lazy thug.)

As time went on, Billy's mutation continued: his eyes turned green and began to glow in the dark, his canine teeth became elongated like fangs, his senses became heightened, he became increasingly aggressive (particularly when under stress) and he began to prefer his meat extremely rare, suggesting a rather alarming gradual personality change.

The Leopardman's foes included the Cat Man (a burglar), Vampirello the human bat (a circus acrobat), the Ghost of Lurcher Creel, the Snow Beast (Conrad Klaws), the Roller Monster, the Alien (a wrestler), the Grey Ghost (a Leopardman robot), the Leopardman's Ghost, newspaper editor Thaddeus Clegg, and a police inspector named Craddock who believed him to be a dangerous menace (as did much of the town, an unfortunate consequence of patterning one's heroic identity on a lethal carnivore).

Retrieved from "https://britishcomics.fandom.com/wiki/The_Leopard_from_Lime_Street?oldid=146947"
Community content is available under CC-BY-SA unless otherwise noted.