Start a Wiki
The Knucker 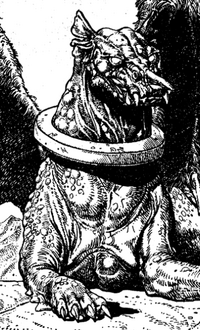 The Knucker is a character from the 2000 AD strip Sláine. It was the prime bull-dragon belonging to Nest's father, who farmed dragons for a living. After her father's death Nest returned to the family farm, telling the wandering Sláine and his companion Ukko about the dragons along the way. Sláine decided to steal the dragon, and shortly after he did so a fight erupted in the sky between the Knucker and the recently re-awoken ice dragon known as the Mata. The Knucker and Sláine won the fight and the Mata died, blowing itself up on its blocked flames.

The Knucker would accompany Sláine for a while afterwards, often helping him against foes (by eating them). Sadly however, the Knucker was eventually slain by a Shadow Dragon conjured by the druidess Medb.

Retrieved from "https://britishcomics.fandom.com/wiki/The_Knucker?oldid=71793"
Community content is available under CC-BY-SA unless otherwise noted.