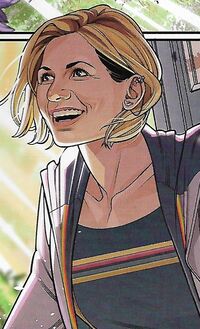 The Doctor has fought some of the most evil would-be conquerors in existence, including the Daleks and their creator Davros, The Master, the Cybermen, the Ice Warriors, the Sontarans, the Zygons, the Silurians and their cousins the Sea Devils, the Quarks, the The Weeping Angels, the Voord, the Zarbi, the Celestial Toymaker, the Autons, the Kleptons, the Go-Rays, the Ugrakks, the Vogans and the Trods, Melanicus, the Time Witch, Josiah W. Dogbolter, the Tribe of Gum, Joylove McShane, General Ironicus and The Iron Legion, the Malevilus, the Moderator General and Beep the Meep.

If mortally wounded, the Doctor can 'regenerate' his physical form, literally becoming a new man (see gallery for his various different faces). He is currently on his 13th incarnation. He has two hearts and a respiratory bypass system, he can enter a death-like coma at will while his body repairs injuries at an accelerated rate, and he can survive unprotected in space for up to six minutes.

The Doctor once claimed that an aspirin could kill him.

None. He hates them.

The Doctor is the lead character (though not the title character; 'Who' is almost certainly not his name) in the television show, comic strip and all round multimedia franchise Doctor Who. His various incarnations have been played by William Hartnell, Patrick Troughton, Jon Pertwee, Tom Baker, Peter Davison, Colin Baker, Sylvester McCoy, Paul McGann, Sir John Hurt, Christopher Eccleston, David Tennant, Matt Smith, Peter Capaldi and Jodie Whittaker. He should not be confused with the human scientist Dr. Who (played by Peter Cushing) who appeared in two movie adaptations of previously televised stories.

Retrieved from "https://britishcomics.fandom.com/wiki/The_Doctor?oldid=152091"
Community content is available under CC-BY-SA unless otherwise noted.