Start a Wiki
Tharg the Mighty 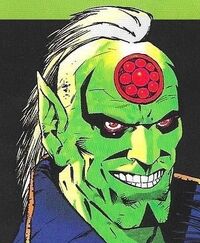 Tharg came to Earth from the world of Quaxxan (which he left because of "the exorbitant rates") to deliver the gift of thrill-power to Earthlets everywhere with his peerless publication, 2000 AD. Aided by his loyal staff of art and script robots, he has been bestowing thrills on us since 1977 (except for that period with the Men in Black which we don't talk about).

Can deliver Rigelian Hotshots to uppity droids or cheeky Earthlets.

Occasionally let down by his incompetent staff.

Magical flute that can charm mice.

Rosette of Sirius implanted in his forehead, a sub-space communicator which can emit subsonic modulations.

Rumours that Tharg was originally a human named Kelvin Gosnell wearing an unconvincing rubber mask are scurrilous lies intended to undermine Terrans' faith in the Mighty One, as are the continuing rumours that since then 'Tharg' has merely been an alias used by a succession of human editors. These disgusting falsehoods should not under any circumstances be believed.

Retrieved from "https://britishcomics.fandom.com/wiki/Tharg?oldid=96625"
Community content is available under CC-BY-SA unless otherwise noted.