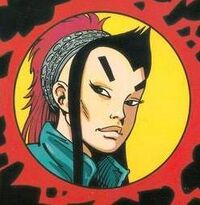 Tao de Moto (which may or may not have been her real name) is the eponymous protagonist of a strip in 2000 AD. She was a Chinese, or possibly Japanese (let's face it, the name sends mixed messages) dancer whose life became complicated when she agreed to carry an alien baby from the planet Empirius in exchange for three hundred thousand eurodollars.

Dancing. Which is probably very useful, in the right circumstances.

Tao's one and only multi-part story, Forbidden Fruit, ran in 2000 AD from prog 723 to prog 749 (skipping 741) and she also appeared in the 1993 edition of the 2000 AD Winter Special (in a story illustrated by Tim Bollard). The story was intended to continue in a series called The Adventures of Tao de Moto, but it never materialised.