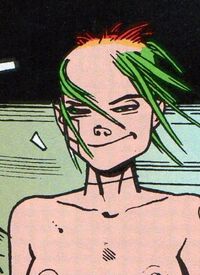 Rebecca Buck is the protagonist of the strip Tank Girl. She was born in post-apocalyptic Australia at some point in the near future. After a childhood chiefly notable only for her collection of novelty pencil sharpeners, she became a tank pilot for an unknown organisation presumably affiliated with the Australian government and then became a bounty hunter.

Rebecca was eventually declared an outlaw after shooting a decorated officer she mistook for her father, and failing to deliver colostomy bags to President Hogan, causing him considerable embarrassment at an international trade conference. Going on the run with her tank (which is also her home) she has since had a series of unlikely and often rather unsavoury adventures, usually in the company of her boyfriend Booga (a mutant kangaroo) and sometimes her friends Jet Girl, Sub Girl, Boat Girl, Stevie and Barney. She also has a number of talking stuffed animals: Mr Precocious, Squeaky Toy Rat and the late Camp Koala, who appears to her as her guardian angel.

Good at driving her tank.

There have also been numerous collected editions.

Retrieved from "https://britishcomics.fandom.com/wiki/Tank_Girl?oldid=103625"
Community content is available under CC-BY-SA unless otherwise noted.