Albion British Comics Database Wiki
Register
Don't have an account?
Sign In
in: Pages with script errors, Comics, 1977,
and 30 more 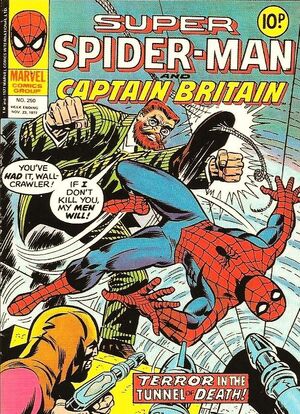 Appearing in "From the Holocaust... a Hero!"

Synopsis for "From the Holocaust... a Hero!"

Captain Britain tells Spider-Man his origin story. The two heroes are then scooped up by a garbage truck driven by Arcade. He tells police captain Jean DeWolff that he has seen nothing, and drives away cackling.

Published by Marvel UK in November 1977.

The noise made by a garbage truck scooping up two heroes is SFLANNG!

The next comic in this series.