Albion British Comics Database Wiki
Register
Don't have an account?
Sign In
in: Pages with script errors, Comics, 1977,
and 25 more 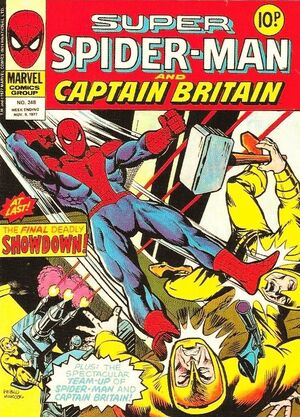 Peter Parker (alias Spider-Man) winds up with Brian Braddock (alias Captain Britain) as a temporary room-mate, in exchange for $50 per week from his (Peter's) university. Neither of the young men knows about the other's secret identity. Therefore, when Brian sees Spider-Man jumping out of Peter's apartment window, he assumes that he is up to no good and changes into Captain Britain in order to follow him. Meanwhile, the villainous Arcade agrees to assassinate Brian.

Published by Marvel UK in November 1977. Reprints from Marvel Team-Up (US) Vol 1 begin.

Brian Braddock is wearing a round Union Jack badge on his lapel, just in case anybody mistakes him for an American.

The next comic in this series.