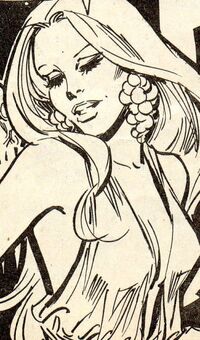 Sugar Jones was a self-centred "fabulous super sex symbol" (her own description) whose principal mission in life was to look good on TV. Her own ambition and vanity frequently rebounded on her, though her overworked and underappreciated assistant Susie Ford did her best to protect her.

Generally provided by the studio.

A running joke in the strip was that Sugar never admitted to her real age, and probably wore a wig in order to look younger than she was.

Retrieved from "https://britishcomics.fandom.com/wiki/Sugar_Jones?oldid=145638"
Community content is available under CC-BY-SA unless otherwise noted.