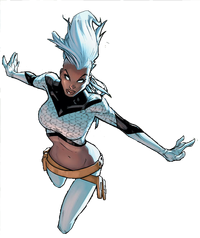 Ororo Monroe was orphaned as a child and grew up on the streets of Cairo supporting herself by picking pockets. When her mutant abilities manifested as she entered adulthood, she began using them in defence of the tribespeople of Kenya, who viewed her as a goddess. She was recruited to the ranks of the X-Men by Professor Charles Xavier as Storm, and later became leader of the team after the temporary departure of Cyclops.

Most, but not all, of Storm's appearances in British comics have been reprints of American material.

Retrieved from "https://britishcomics.fandom.com/wiki/Storm_(X-Men)?oldid=145587"
Community content is available under CC-BY-SA unless otherwise noted.