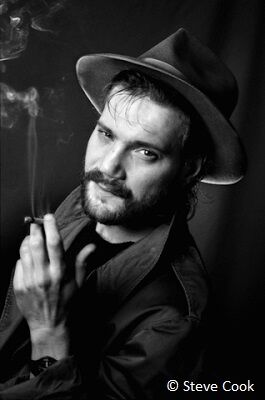 Steve MacManus (a.k.a. script droid Mac-1, sometimes credited as 'Ian Rogan') is a comics writer and editor who joined IPC aged 20 in 1973 as a sub-editor on Valiant. He stayed on that title until 1975 when he moved over to Battle Picture Weekly, and also began freelancing for Action, appearing in photo features as the comic's mascot, Action Man, as well as writing episodes of Dredger, The Running Man and Sport's Not for Losers.

In 1978 he was transferred across from Battle to the new science fiction weekly Star-Lord, where he was sub-editor under Kelvin Gosnell, and after that title's cancellation moved over to relace Nick Landau as sub on 2000 AD. For 2000 AD, he wrote episodes of M.A.C.H One, M.A.C.H Zero and The V.C's, and around the same time also wrote The Lawless Touch for Tornado. Later in 1978 he was promoted to editor of 2000 AD and retained that position until 1987, his tenure now being regarded as the title's golden age when writers such as John Wagner, Alan Grant, Pat Mills and Alan Moore were crafting some of its most memorable and enduring strips.

MacManus also had a hand in the creation (with Gerry Finley-Day and Dave Gibbons) of Rogue Trooper, and he would co-write the character (with Simon Geller) in 1986, as well as keeping his hand in with episodes of Tharg's Future Shocks, Strontium Dog (in 2000 AD Sci-Fi Special 1979) and the one-off story Last Thought (1981). He also wrote the one-off story Shok! for the 1981 Judge Dredd Annual, and this story became the basis for Richard Stanley's 1995 film Hardware. Stanley initially denied this, but after a court case MacManus and artist Kevin O'Neill were given credits on the film, which is now considered to be the first 2000 AD movie adaptation.

In 1987 MacManus became Managing Editor of the 2000 AD group, and launched the adult-orientated, politically aware companion title Crisis, which gave writer Garth Ennis, among others, his first real break in comics. However, after 50 issues (during which time IPC's comics division Fleetway had been sold to Robert Maxwell) he resigned from Crisis following problems with censorship. In the early 1990s he edited the first twelve issues of the Judge Dredd Megazine and co-edited Batman . Judge Dredd: Judgement on Gotham with DC Comics editor Denny O'Neill. He also oversaw Revolver and Diceman for the 2000 AD Group.

In 1995, he became the Managing Editor of the pre-school titles of Fleetway's new owners Egmont, editing Sonic the Comic among other titles. However, he returned to 2000 AD in 1997 to write their 20th anniversary supplement 3000 AD with David Bishop, co-creating the character B.L.A.I.R 1. MacManus moved out of comics and into magazine editing at Egmont when they sold 2000 AD to Rebellion in 2000, but stepped down in 2011.