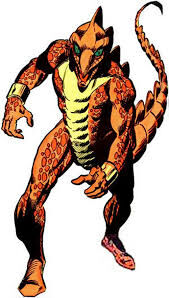 Dr. Vincent Stegron was a scientist who really, really liked dinosaurs. So much so that he transformed himself into one, and his ultimate goal is to ensure that dinosaurs rule the Earth once more. To this end, he has engaged in a number of ludicrous schemes in locations as far afield as New York City and the Savage Land, which have brought him into conflict with various individuals including Spider-Man (Peter Parker), Ka-Zar and The Lizard.

Normal saurian strength of a humanoid dinosaur of his age and build who engages in intensive regular exercise.

Stegron is primarily an American Marvel character. There is absolutely no good reason for him to be on this wiki, except that I can do it, and he's one of my favourite characters and has been since I first encountered him in Super Spider-Man and Captain Britain Vol 1 235, more than forty years ago. Hey, he's a bloke who turned himself into a dinosaur! Can you blame me?

Retrieved from "https://britishcomics.fandom.com/wiki/Stegron_the_Dinosaur_Man?oldid=151094"
Community content is available under CC-BY-SA unless otherwise noted.