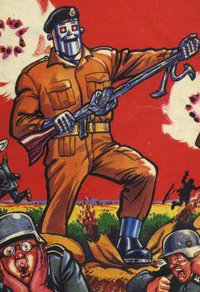 The Mark One Indestructible Robot, known as the Steel Commando, is a character from the comic Thunder. He was a robot soldier built by the British army in World War II to help them defeat the Nazis.. Unfortunately, due to a glitch in his programming, he would only obey orders given by Ernie Bates, widely regarded as the laziest man in the army.

Decades later the Commando was reactivated, apparently by the second Doctor Sin, whom it erroneously believed to be Ernie.

it's stated in Judge Dredd Megazine Vol 1 421 that part of the Steel Commando's brain is, in fact, human, and suffering from PTSD.

Retrieved from "https://britishcomics.fandom.com/wiki/Steel_Commando?oldid=152493"
Community content is available under CC-BY-SA unless otherwise noted.