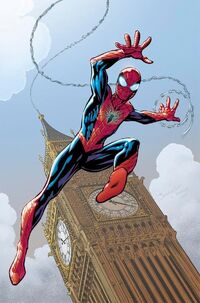 Peter Parker was a brilliant but shy and withdrawn high school student when he was bitten by a radioactive spider at a science fair and gained the proportionate strength, speed and agility of a spider. He created the costumed identity of Spider-Man in order to make money as an entertainer, but dedicated himself to fighting crime after the murder of his beloved Uncle Ben by a thief he could have eariler captured convinced him that "with great power must come great responsibility." After becoming a crime-fighter Peter Parker was even more shy and withdrawn, because now he had to conceal from all his closest friends and family the fact that he was actually a superhero whose death was eagerly sought by scores of evil-doers.

Peter has worked for some years as a freelance photographer for the Daily Bugle, and also on occasion for its sister paper in London, the Daily Herald (during the incident in which he encountered the would-be hero Thunderclap and the cyborg Assassin-8). He also encountered a stranded Skrull in London.

He has numerous enemies including the Vulture, the Green Goblin, Electro, Morbius, Hobgoblin, the Molten Man, Kingpin, Will O' The Wisp, Doctor Octopus, the Lizard, Kraven, Mysterio, Lightmaster, Tarantula, the Scorpion, the Hit-Man, Rocket Racer, the Shocker, the Rhino, the Sandman, the Man-Wolf, Morbius, Bluebird, Arcade, Stegron the Dinosaur Man and Seth Youngblood.

Superhuman agility and reflexes; superhuman strength; ability to stick to walls; 'spider sense' which warns him of danger.

(Formerly) Spider-Mobile (slightly hampered by the fact that he couldn't drive).

Spider-Man is, of course, an American character created by Stan Lee and Steve Ditko for Marvel Comics in the USA, but a British-originated Spider-Man story was published by Marvel UK in Spider-Man Weekly #607-610 in 1984, in which Spidey travelled to London to appear on the TV show Saturday Starship (a man in a Spider-Man costume did indeed appear that week, as a publicity stunt) and met the deranged Assassin-8.

This was an experiment to see if British-originated stories would be acceptable to the readership, just in case developments in the US stories about to be reprinted (in which Spidey got a new, black costume) were not. In the event, the experiment was never followed up on, except in a short strip in Secret Wars Vol 1 25.

Retrieved from "https://britishcomics.fandom.com/wiki/Spider-Man_(Peter_Parker)?oldid=160495"
Community content is available under CC-BY-SA unless otherwise noted.