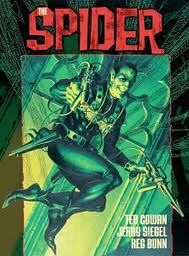 Nothing is known of the history of the Spider before he appeared in the United States in 1965 and announced himself as the 'King of Crooks', recruiting notorious criminals such as 'Professor' Pelham and Roy Ordini and operating out of a Scottish castle he had had transported over and rebuilt brick by brick. After clashing with a number of other criminals including the Exterminator, the Spider (who appeared to have a substantial amount of money behind him and to have turned to crime for kicks) discovered he enjoyed the thrill of being a crime fighter, and effectively changed sides, embarking on a quite successful career as a hero! He went on to battle a number of unusual foes, including Dr. Mysterioso and The Infernal Gadgeteer.

There are varying accounts of the Spider's later years. According to one, he returned to crime but eventually retired, later encountering the hero Jack Staff. According to another, seemingly contradictory account, he became a depraved cannibal. And according to a third, he was eventually recruited by the British secret service to hunt down other, similarly unusual individuals before being betrayed by them and locked up for several decades until he was released in a mass prison break and set off for parts unknown at the controls of the giant robot ape Mytek the Mighty. A more recent account also states that he was recruited to hunt down other unusual individuals by the British government before being betrayed by them and placed in suspended animation on a secret island prison; in this account, he was eventually freed by a soldier whom he had years earlier conditioned with a post hypnotic command!

The Spider is an accomplished hypnotist.

Various, including a flying disc.

The Spider has had a chequered publication history, initially appearing in IPC's Lion from 26th June 1965 to 26th April 1969 and later being reprinted in Vulcan in the mid 1970s, as well as appearing in the Stupendous Library Series from 1967 to 1968. Though created by Ted Cowan, many of his original adventures were written by American Superman creator Jerry Siegel.

The contradictory accounts of the Spider's later years come from his appearances under subsequent publishers. He appeared in a 2000 AD Action Special in 1992, depicted by Mark Millar as a cannibal but this publication later proved to be unauthorized (2000 AD believed they held the rights to all the IPC characters, but they did not; Tim Kelly also appeared in the Special and in 2000 AD itself around this time, also without authorization) and is generally ignored by fans of the character.

Creator Paul Grist later used an elderly Spider in his Jack Staff series, while Alan Moore, Leah Moore, John Reppion and Shane Oakley featured a seemingly ageless Spider as a major character in their limited series Albion in 2005 to 2006.

Another version of the Spider on the parallel world known as Earth-238 was revealed to have been murdered by the cyborg called the Fury in Alan Moore's Captain Britain series.

Retrieved from "https://britishcomics.fandom.com/wiki/Spider?oldid=156418"
Community content is available under CC-BY-SA unless otherwise noted.