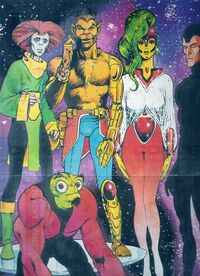 The Special Executive are a group of parahuman mercenaries led by the lupine cyborg Wardog and including the intangible Zeitgeist, the precog Cobweb, Legion (who could call future versions of himself back in order to become a one-person army) and the mysterious Fascination, amongst many others (other, more minor members included Viridian the Brainfeeler, Millennium, Oxo, and the poet Lady Burning Fish). They at first appeared to be agents of the Time Lords of Gallifrey, but later turned up on Earth and became first enemies and then allies of Captain Britain (Brian Braddock) after being hired by the manipulative Saturnyne. Several of their members originally belonged to the group known as the Technet (often under different names).

The Sidewinder, a trans-dimensional vehicle.

The Special Executive were first created by Alan Moore in a trilogy of stories which began in Doctor Who Monthly Vol 1 47, before being incorporated by him into his epic run on Captain Britain. Marvel UK reprinted the team's early appearances alongside the Captain Britain strip in The Daredevils and gave the characters extensive publicity.

When Moore left Marvel he refused to allow the company to use the name 'Special Executive', or the characters of Wardog, Cobweb and Zeitgeist (whom he had created along with David Lloyd) again. This prompted Alan Davis and Jamie Delano (who had replaced Moore on the Captain Britain strip) to create the Technet as replacements for the Executive, using the other members of the team which Davis had designed (though Fascination was later renamed 'Scatterbrain') and explaining that the Technet were actually an earlier version of the same time-travelling team! The Special Executive did make a one panel cameo appearance in an issue of Excalibur Vol 1 later on, but could not be referred to by name.