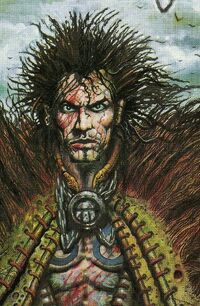 He later gave up his title (after a number of adventures in other time periods as the servant of the Goddess) to Gael, founder of the Gaelic race. Having lost his wife, Niamh, murdered by the evil Moloch, Sláine eventually left his homeland in order to find his missing son, Kai. Eventually finding him in a travelling circus run by Ukko. His adventures continue.

Has been known to use a European bison; a mammoth; a dragon called The Knucker; another dragon belonging to his enemy Medb; and a super-dimensional cosmic being or 'macrobe' called Pluke that could only fly if Sláine had altered the cosmic balance by performing a good deed. Plus he sometimes has wings.

Retrieved from "https://britishcomics.fandom.com/wiki/Sl%C3%A1ine_MacRoth?oldid=68054"
Community content is available under CC-BY-SA unless otherwise noted.