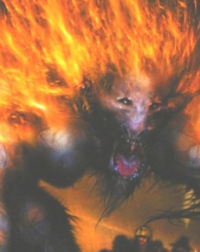 Skathan was a lycanthrope who was secretly the father of carnival performer Estella the Sleepless Beauty, the girlfriend of Sláine MacRoth's son Kai. Skathan was complicit in keeping Estella awake in order to prevent her from falling prey to the same curse as him, and actually tried to kill her, but was prevented from doing so, at one point being set alight by candles belonging to her fellow performer Hinky Punk. Estella was eventually revealed not to be a lycanthrope.

Retrieved from "https://britishcomics.fandom.com/wiki/Skathan?oldid=156631"
Community content is available under CC-BY-SA unless otherwise noted.