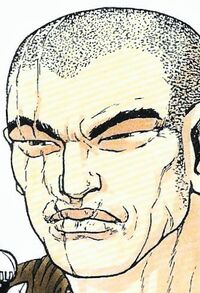 Shimura is the hero of an occasional Judge Dredd Megazine strip, Shimura, set in the world of Judge Dredd. He was a Judge Inspector in Hondo City (what Japan has become in the twenty-second century), graduating from the Academy of Justice in 2107 AD. However, he abandoned his rôle in 2115 AD after becoming disillusioned by the judicial system's complicity with organised crime and big business. Now he is a ronin, a renegade warrior, answerable to no-one in his ongoing quest for justice. Sometimes he'll kill bad guys if the price is right; sometimes he'll do it for free if they're bad enough.

Shimura himself is not a particularly nice person, and is not averse to torturing someone until they give him the information he wants: "I hurt people until someone gave me his name — hurt them so much they couldn't be lying. I've become very good at hurting people."1 He once tried to commit ritual suicide, remembering all the deaths he had caused and witnessed, but was prevented from disembowelling himself by a woman who wanted to keep him around to stop her from becoming evil. It's not surprising that he drinks.

Shimura got the parallel scars on the right side of his face and head while he was still a cadet. The assassin Stan Lee killed the man Shimura was supposed to be protecting, Toyama, while the cadet was sleeping with Toyama's daughter, Yukiko. He then killed Yukiko as well, and left Shimura with a permanent physical reminder of his failure. Twenty years later, Shimura defeated Stan Lee, a.k.a. Deathfist, in single combat and removed his left hand with one blow of his katana, telling him to find a new name.

Before turning renegade Shimura promoted Hondo City's first ever female Judge Inspector cadet, Aiko Inaba, to full Judge Inspector status. The pair remain occasional allies, although Aiko has chosen to try to change the system from within rather following the path of her former mentor. Shimura and Aiko have never been romantically involved, which is just as well — as his creator Robbie Morrison has pointed out, "all his relationships end up with dead people everywhere."2

The paths of Judge Dredd and Shimura have crossed more than once. Their relationship is somewhat prickly, but although Dredd disapproves of the ronin's methods he occasionally needs his help to bring a perp to justice.

Women and alcohol. Can be manipulated by his compassion for children in distress.

1Shimura: Outcast, Judge Dredd Megazine 2.50 to 2.55.
2Interview with Robbie Morrison in Shimura, volume 61 in Judge Dredd: The Mega Collection. In the same interview he talks of how he named the character Takashi Shimura after the lead actor in Seven Samurai: "I have since been told by Japanese people that 'Takashi Shimura' really is not even a particularly exciting name in Japan; it's really common, the equivalent of 'Tom Smith'."

Retrieved from "https://britishcomics.fandom.com/wiki/Shimura?oldid=80459"
Community content is available under CC-BY-SA unless otherwise noted.