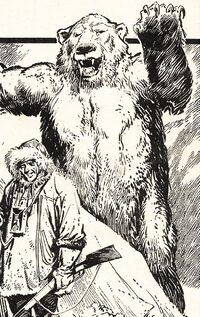 "THE ONLY BEAR ON THE CIA DEATH LIST!" The eponymous protagonist of the 2000 AD series Shako was a polar bear who unwisely swallowed a capsule containing a secret government-created germ warfare culture, thinking it was a tin of food, and became a target of the CIA agents based at Ice Station Delta. They wanted to retrieve their weapon of mass destruction, which was capable of turning a living creature's bones into jelly (when not encapsulated), and were hampered in their efforts by the fact that Shako kept killing them in a variety of gruesome ways. Which serves them right, really. Their leader, Jake K. Falmuth, vowed to kill Shako after the bear bit off his arm, a symbolic castration reminiscent of that undergone by Captain Ahab from Moby-Dick: "He's taken my gun arm! My killing arm! I— I'm only half a man now!"

The strip mostly featured amusingly gory violence, but it descended into pathos when Shako's mate and cubs were killed by a pair of hunters called Marx and Spencer. Shako, readers were told, had enjoyed playing with his cubs and teaching them how to hunt. (In real life male polar bears play no part in the raising of their cubs, and would be quite happy to kill and eat them if they encountered them at a later date.)

Later the KGB got involved, and died just as gruesomely as the Americans — one of them fell into a vat of boiling whale blubber. Shako also befriended an Eskimo child called Little Unk, who hid him in a cupboard in his school. Upon being discovered, Shako ripped Unk's teacher in half and killed several of his classmates. The homicidal bear was eventually slain by the half-Eskimo ecologist Buck Dollar, but he took his killer with him.

All the usual ursine ones (fishing, hunting, etc).

Shako possessed the normal strength of a polar bear of his size and weight who engaged in moderate regular exercise.

His teeth and claws.

An abridged version of the series was reprinted in 2000 AD Annual Vol 1 9.

Retrieved from "https://britishcomics.fandom.com/wiki/Shako?oldid=155747"
Community content is available under CC-BY-SA unless otherwise noted.