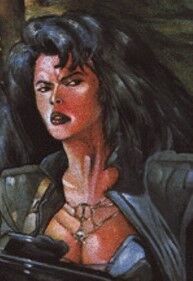 In the closing years of the 21st century, the secret of eternal life has been discovered, but the Chronos Hormone is only available to the very rich. The young rebels are locked in a war with the ruling Wrinklies, a war they cannot win... until Dakini the Sex Warrior arrives. Part angel, part devil, she uses her mysterious arts of Tantrology to unlock the sexual energies of the rebels and use them against their aged oppressors and their sinister creations, the Steroids...

Uses sexual energy as a weapon. Apparently. Probably best not to ask, really.

Sex Warrior was the only strip in Toxic! with a female lead.

Retrieved from "https://britishcomics.fandom.com/wiki/Sex_Warrior?oldid=97349"
Community content is available under CC-BY-SA unless otherwise noted.