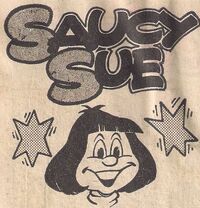 Saucy Sue was a long running character from the Beezer. She was called Saucy Sue because her name was Sue and she was allegedly a bit saucy.

Unlike most of DC Thomson's kid characters, Sue (despite her name) was not particuarly mischievous, and was generally on the side of the angels.

Retrieved from "https://britishcomics.fandom.com/wiki/Saucy_Sue?oldid=92815"
Community content is available under CC-BY-SA unless otherwise noted.