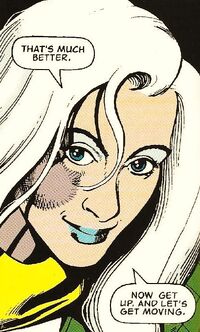 Opal Luna Saturnyne was the manipulative, deceitful Omniversal Majestrix of the Dimensional Development Court, responsible for maintaining the integrity of the Omniverse, an infinity of parallel universes. She first encountered Captain Britain of Earth-616 when he accidentally arrived on Earth-238, a retrograde world which she and her Avant Guard were trying to give an evolutionary 'push', but which ended up being devastated by the reality-warping mutant Mad Jim Jaspers. When Saturnyne realised that Earth-238 was doomed she and her Avant Guard did a runner, abandoning Captain Britain to what would have been his death if Merlyn hadn't rescued him.

For her failure on Earth-238, Saturnyne was deposed and sentenced to execution, but was saved by a reluctant Captain Britain and the parahuman mercenaries known as the Special Executive, whom she had hired. Forced to accept Captain Britain's hospitality while on the run from the Dimensional Development Court, Saturnyne was a key player in helping him defeat his own Earth's version of Mad Jim Jaspers (who was considerably more powerful than the version on Earth-238).

Secretly taking a DNA sample from Jaspers' corpse, she returned to the Dimensional Development Court threatening to clone the monster and unleash him again if her successor, Lord Mandragon, did not reinstate her. (She was fortunately unaware that Roma, daughter of Merlyn, had already killed the cell samples.) Saturnyne later became the majordomo of Roma, who had taken Merlyn's place as the nominal ruler of Otherworld, the mystical realm which is the linchpin of the Omniverse.

Her Avant Guard can teleport.

Retrieved from "https://britishcomics.fandom.com/wiki/Saturnyne?oldid=125204"
Community content is available under CC-BY-SA unless otherwise noted.