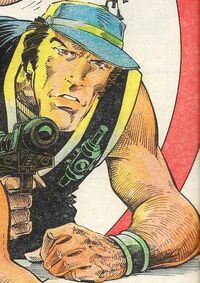 Sam C Slade (what the C supposedly stood for varied according to his mood) was the original protagonist of the 2000 AD comic strip Robo-Hunter. Born in 2080, he served as a sergeant in the Great Robot War before becoming one of the best robo-hunters in New York. He was nearing retirement age when two men named Rogers and Chan hired him to discover the fate of some missing colonists on the planet Verdus.

Inadequate shielding meant the faster-than-light journey knocked thirty years off Sam's age, leaving him back in his prime (and also turning his pilot, the obnoxious Jim Kidd into a mouthy, cigar-smoking one-year-old). This was handy, as upon arriving on Verdus, Sam found it was being dominated by the robots who had been sent ahead to prepare it for colonization, who refused to believe that obviously inferior creatures such as humans could possibly be their creators.

Having sorted out the Verdus mess (despite the loss of his faithful Robo-Meter, Cutie), Slade returned to Earth and took on the God Droid, who was attempting to take control of New York's gangs, acquiring (somewhat unwillingly) a new assistant along the way in the kit-built idiot robot Hoagy. Sam thwarted the mechanical maniac, but in the process made enemies of the Amalgamated Androids Union, who forced the Mayor to banish him from New York.

Sam moved to Brit-Cit (the former United Kingdom) with Hoagy and Stogie (a robotic cigar intended to help him quit smoking) and reopened his office there, solving several more cases and coming into frequent conflict with Kidd, who had also become a Robo-Hunter. Among Sam's most notable successes was defeating the Human League who, led by the dupicitous Sir Oswald Modroid, attempted to oust the Prime Droid 'Iron Aggie' during National Song Year (case ref: 'Play it Again, Sam').

Eventually, Sam was assassinated by Deller, the scientist who had been behind (or rather, inside) the God Droid, but found himself denied access to Heaven since he had, years before, been cloned without his knowledge whilst in the Army (by Deller, coincidentally enough). The Celestial authorities decreed that Slade and his clone, Sam Scumm, were the same person and must face judgement at the same time.

Rather than spend years as a ghost waiting for Scumm to die, Sam elected to merge with him, saving the convict Scumm from being forcibly aged fifty years (a cheap alternative to prison, apparently), and then went on to solve his own murder before retiring to Tahiti on the proceeds of the case and buying a yacht, the S. S. Dunhuntin. Scumm's personality was gradually submerged beneath Sam's own.

However, after 51 years had passed, Hoagy and Stogie decided retirement was bad for Sam, who had become old and fat. They gave him fourteen Mickey Finns (sequentially, not simultaneously), sailed away with him on his yacht while he was still comatose, and left him on the Mysterious Island of Dr Droid — in reality, a terrifyingly strict health farm. Released after two years, Sam returned to New York to find that Hoagy and Stogie had embezzled and spent all his money so that he would have to return to being a Robo-Hunter, which they regarded as his true calling. Sam reluctantly complied as he had no choice.

Sam undertook several more cases, apparently being rejuvenated again along the way, but has since retired again (after losing his body while gambling and ending up with his head transplanted onto a new, younger model). He passed Hoagy and Stogie on to his granddaughter Samantha, who continues the family tradition of Robo-Hunting.

Leymek Hoverstreak (an ideal city car... or at least it was until Sam totalled it); hotwired government hovertruck.

In the early 1990s, the Robo-Hunter strip was briefly revived under several new creators, notably Mark Millar who, along with artist Jose Casanovas, took the strip in a new direction and made Sam a more antagonistic character, and Peter Hogan, who made a spirited but ultimately unsuccessful attempt to reverse the damage.

Several of these stories conflict with the continuity introduced in the original strip and since resumed in the Samantha Slade strip. (For instance, they refer to Jim Kidd as 'William' and show Sam's grandmother, who would logically have been long dead since he was chronologically over 130 himself by then thanks to his time warp accident.) These stories may therefore have to be considered apocryphal.

Retrieved from "https://britishcomics.fandom.com/wiki/Sam_C_Slade?oldid=137215"
Community content is available under CC-BY-SA unless otherwise noted.