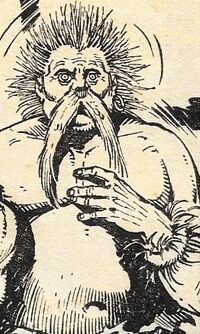 Roth Bellyshaker is a character from the 2000 AD strip Sláine who was the husband of the warrior Macha and the assumed father of Sláine MacRoth. In the years prior to his son's birth, Roth and his wife were fierce and powerful warriors who battled against the Fomorian hordes.

Over time however, Roth grew fat and became boastful, alienating a lot of his former friends. He also became a drunkard and frequently assaulted Macha, whom he accused of fathering Sláine with another man. When Sláine tried to stop him, Roth would beat him too and call him a bastard.

One of Roth's drunken boasts caused Macha's death when he claimed she could outrun the king's chariot in a race (which admittedly, she would have done had the charioteer not cheated). Roth may have made his boast deliberately as a way of getting rid of Macha, who had cheated on him many times. Eventually Roth was kicked out of the tribe and Sláine was taken in by one of Roth's few remaining friends, Mongan Axehead.

Roth and Sláine were reunited when they were both imprisoned in a wickerman by the Drune Lords. Sláine helped the prisoners to escape but then fell off the wickerman because of the power of the worm god Crom-Cruach, invoked by the Lord Weird Slough Feg. Roth was enraged by Sláine's apparent death and tried to attack Feg, but Feg used his magic to make Roth fatally stab himself in the stomach instead.

A vicious warrior, even despite his weaknesses.

Formerly fit human male who has gone to seed.

It isn't clear why, if Roth thought that Sláine wasn't his son, Sláine's apparent death would make him attack the Lord Weird Slough Feg while shouting, "I'll colour you red for that, Feg! It's my son you've killed!"

Retrieved from "https://britishcomics.fandom.com/wiki/Roth_Bellyshaker?oldid=76644"
Community content is available under CC-BY-SA unless otherwise noted.