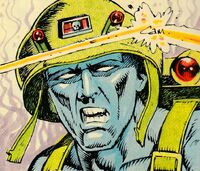 The Rogue Trooper was the eponymous protagonist of the 2000 AD strip Rogue Trooper, apart from when it was Friday (see below). Rogue was one of the Genetic Infantry or G.I.s, bred to fight in the endless war between the Norts and the Southers on the planet Nu Earth. A creation of the Souther side's scientists at their orbital base, Milli-Com, the G.I.s were genetically engineered to survive unaided in the poisonous wasteland that Nu Earth had become, where regular soldiers could not survive without all-enveloping 'chem suits'.

When the rest of the male G.I.s (the females were used on Milli-Com as support staff) were all killed on airborne assault in what became known as the Quartz Zone Massacre, Rogue discovered that a traitor at Milli-Com, one of the generals, had betrayed them. Taking up the helmet, rifle and backpack of three of his murdered friends, containing the 'biochips' (digitally preserved minds) of the three — Gunnar, Helm and Bagman— Rogue went AWOL to track down and kill the Traitor General. He intended afterwards to return his 'biochip buddies' to Milli-Com where they could be 're-gened' (given new cloned bodies) by the 'Gene Genies' (scientists).

After several adventures, and encounters with oddball characters like the body looters Mr Brass and Mr Bland, the chem-nurse Sister Sledge, the fanatical G.I. Major Magnam (whose chip had been preserved in his handgun) and the female G.I. Venus Bluegenes, Rogue eventually succeeded in his quest. He later went to work for Milli-Com again in another warzone but was eventually contacted by a mysterious race of aliens who wanted him to assassinate a number of high ranking Nort and Souther officers in order to end the war. Rogue and the biochips agreed to do this and went AWOL again, but eventually discovered that they were being manipulated.

With the biochips placed in new, infant clone bodies supposedly with no memory of their former lives (and hence, in Rogue's eyes, a second chance at innocence), Rogue left his boys with a couple of benevolent scientists and walked off into the wilderness.

Years later, having been reunited with the now adult again Gunnar, Helm and Bagman and with Venus Bluegenes under unrevealed circumstances, Rogue encounterd the second generation G.I. named Friday, who had also been manipulated by his superiors and gone rogue. They embarked on a mission together, but Helm was killed and Gunnar reduced to biochip status and placed in his gun again when they invaded an alien spaceship. Friday and Venus escaped, taking Gunnar with them, but Rogue and Bagman were left on the sabotaged ship which blew up minutes later, taking them with it. They held hands as they died.

Rogue's remains (and his mangled biochip) were later discovered by an alien life form which used his DNA as the template to create a new clone, the man named Tor Cyan.

Like all G.I.s, Rogue's brain contained an implanted 'biochip' into which his mind would be downloaded at the moment of his physical death. The dying G.I.s comrades then had sixty seconds in which to remove the chip from the brain and place it in a special slot in a piece of their equipment where it would continue to 'live' in a digitized state until a new clone body could be provided. If left unhoused longer than sixty seconds, the biochip would 'die'.

Rifle containing the biochip of his comrade, Gunnar, which the chip could activate remotely if Rogue was incapacitated.