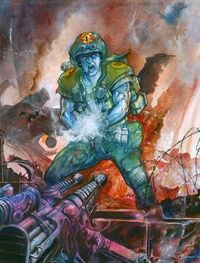 Friday was a second-generation Genetic Infantryman created by the Clavel Corporation to fight a war on the world he knew as Nu Earth. The sole survivor of a massacre which wiped out the rest of the G.I.s at Hill 392, Friday sought vengeance, discovering that he and his comrades had been manipulated all along by their creators and by the Artificial Intelligence known as Highside, which controlled the satellite where they had been 'born'.

Heading off into the galaxy to make a new life for himself, Friday discovered the existence of the biochips, AIs containing the brain patterns of his deceased former comrades Top, Lucky and Eightball. He slotted them into his equipment, giving Eightball control of his rifle, Lucky his electronically augmented backpack and Top the surveillance equipment in his helmet.

He also discovered the existence of a previous generation of G.I.s created on a second Nu Earth halfway across the galaxy and met the survivors of that unit: Rogue, Gunnar, Helm, Bagman and Venus Bluegenes. Following the deaths of Rogue, Helm and Bagman, Friday appropriated Gunnar (who had been biochipped and placed in Rogue's rifle) and gave the mentally unstable Eightball over into the custody of Venus (who Eightball believed was his mother).

Friday and his comrades eventually drifted into mercenary work and became mixed up in a galactic war with a religious sect called the Karvanu. Eightball was 'killed', the remaining biochips were captured by the enemy, and Friday was last seen apparently falling into a black hole. His final fate remains unclear.

Experiences human emotions such as grief, and finds it difficult to cope with them.

Among the artists to have drawn Friday's strip are Simon Coleby, Henry Flint, Alex Ronald and Will Simpson.

Friday, the reimagined Rogue Trooper, was ultimately not a very popular addition to the 2000 AD pantheon. When, some years after his last appearance, the original Rogue returned in a flashback story, the opening splash panel showed him standing in front of a wall on which were sprayed the words "Thank God it's not Friday".

Retrieved from "https://britishcomics.fandom.com/wiki/Rogue_Trooper_(Friday)?oldid=119510"
Community content is available under CC-BY-SA unless otherwise noted.