Start a Wiki
Roger the Dodger 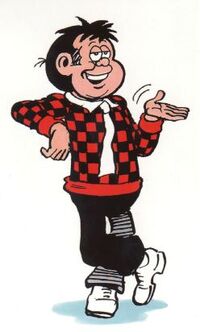 Roger the Dodger is a regular character in the UK comic the Beano. Roger always tries to avoid doing chores with the help of his dodge books, but his dodges usually go wrong, almost always resulting in his punishment (mostly by his long-suffering dad). Roger wears a red and black chequered jumper with a white tie. He also has a pet cat, simply called Dodge Cat, and a crow called Joe. Roger's arch-enemy is a bully called Cruncher Kerr, who always loses to Roger in the end.

Like Dennis the Menace, Roger wears a black and red top, although Roger's is chequered rather than striped. Roger is the cunning sort who doesn't like to work too hard if he can find a way out of it, so he has seemingly endless ruses to get out of virtually every imaginable situation. To this end, Roger has numerous 'dodge books' and more recent strips have featured a 'Dodge Pod', an iPod-type device used to store dodges.

He made his first appearance in Issue no. 561, dated 18th April 1953, drawn by Ken Reid. Reid drew the strip until 1959 when Gordon Bell took over, before the strip stopped in 1960. However, it returned a year later and Roger has been in the comic ever since. The first strips after his comeback were drawn by Bob McGrath, but after McGrath moved to The Three Bears in 1962, Reid returned as artist. He then drew Roger for the next two years until he left D.C. Thomson in 1964, when Robert Nixon took over as artist.

Nixon drew Roger for close on a decade until he also left D.C. Thomson in 1973, after which Tom Lavery became the artist. He drew Roger for three years before Frank McDiarmid took over in 1976. However, when Euan Kerr became the Beano editor in 1984, he brought back Nixon to draw the strip once again, though this time in a noticeably different style.

The strip was expanded to two pages in 1986, which saw the introduction of Roger's Dodge Clinic, which was a regular feature in the comic until 1988 and continued to appear sporadically up to 1992. The strip was printed in full colour for the first time in 1993 when the Beano moved to full colour printing. Nixon continued to draw Roger until his death in October 2002, although his strips continued into 2003 as they were stockpiled.

Barrie Appleby took over as artist and has largely drawn the strip since then, in a style similar to Nixon's. However, several strips were drawn by Trevor Metcalfe in 2003 and 2004, and some of Nixon's strips have been reprinted, especially in late 2005 and 2006.

In 1970s strips, Roger had a pet, Joe Crow, who in the 1980s was replaced by Dodge Cat. Also, in some 1980s and 1990s strips, fellow dodgers Crafty Colin and Sneaky Pete made appearances (Sneaky Pete made another appearance in the 2006 Beano annual). Nowadays Roger's best friend is a boy called Dave.

'Dodge Pod'; dodge books (what on earth is he thinking? Don't write it down!).

Retrieved from "https://britishcomics.fandom.com/wiki/Roger_the_Dodger?oldid=39020"
Community content is available under CC-BY-SA unless otherwise noted.