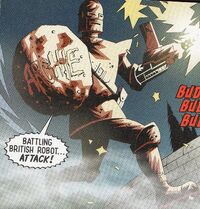 Originally built by Professor CR Ritchie in the early 1950s, Archie was at first incapable of independent action and operated by remote control by either the professor or his son Ted and Ted's friend Ken Dale, who used him to fight injustice. Later, in the mid 1960s, Archie gained a degree of independence and a voice, which revealed him to have a likeable but pompous and boastful personality. He contested with various menaces including the alien Krulls and the creature known as The Sludge.

The Castle, a time machine shaped like a giant chess piece.

Retrieved from "https://britishcomics.fandom.com/wiki/Robot_Archie?oldid=88161"
Community content is available under CC-BY-SA unless otherwise noted.