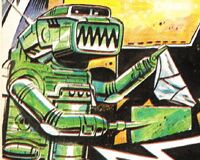 Ro-Jaws is an anarchic, anti-authoritarian character in the 2000 AD strips Ro-Busters, Nemesis the Warlock and ABC Warriors. Originally named Federal Recycling & Environmental Droid 2-L, he was a municipal sewage robot decommissioned because of faulty language circuits. The foul-mouthed droid (in every sense; he ate rubbish) was sold to Howard Quartz's Ro-Busters organization and found a new career as a rescue worker. Ro-Jaws helped to save quite a few people's lives but very rarely received any thanks or recognition for his efforts. He wasn't paid either, because he was technically a piece of equipment.

Eventually Quartz decided to close the operation down and scrap the droids working for it. Alongside longtime partner Hammerstein, Ro-Jaws led most of his colleagues in a bid for freedom which saw them successfully flee Earth for a new life on the robot free world.

Centuries later, Ro-Jaws — now working as a hotel porter in the Gothic Empire — was thrown into the service of Nemesis the Warlock and became friends with his familiar Grobbendonk. Through Nemesis he was reunited with Hammerstein and his ABC Warriors. In recent years, he has been working at the Kollege of Khaos run by the ABC Warrior Deadlock.

His jaws are incredibly strong, as is his stomach. He can operate underwater and see in infra-red.

Doesn't have a hyper-intelligent tactical mind like a war robot, but compensates for this with courage, cheerful determination and a shrewd understanding of human/robot nature.

His teeth; caustic foam (intended for unblocking drains) which he once used to fight off some alligators.

Outside his official continuity, Ro-Jaws also functioned as a 'host' to an intermittent series of short stories in 2000 AD entitled Ro-Jaws' Robo-Tales, all of which revolved around robots (Steve Dillon drew one of them, Jose Casanovas a few. Gary Rice was the most prolific writer on the series). This was effectively a companion series to Tharg's Future Shocks, and Ro-Jaws would frequently be seen to interact with Tharg.

Retrieved from "https://britishcomics.fandom.com/wiki/Ro-Jaws?oldid=96492"
Community content is available under CC-BY-SA unless otherwise noted.