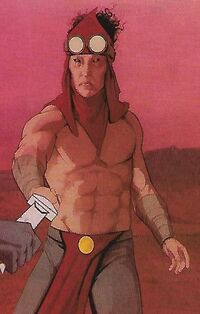 Revere was a 'Witch Boy' who lived in post-apocalyptic London, a desolate, blasted wasteland where it was literally impossible for him even to find a shirt. After his death he was recruited by the mysterious organisation known as Indigo Prime, guardians of all the realities that were, are and could be. Revere is currently based in a level of the collective human subconsciousness known as the Dreamtime, fighting mind-meltingly strange battles against even stranger enemies. He still doesn't wear a shirt.

Inabiity to see how tedious and mostly incomprehensible his life story was to readers of the galaxy's greatest comic.

The Ophidian Sword, which cuts at the symbolic level, not the physical.

There were three series of Revere:

Smith says that "Revere was more of a collaboration than most of the strips I'd written. Simon had come up with this great-looking character and backdrop. I wrote a story where he could show off his art to its full effect. I think it's amazing — weird and dreamy and totally unlike anyone else out there." (Thrill-Power Overload by David Bishop).

The title character made an unexpected return in 2000 AD prog 2054, in an episode of Indigo Prime (another story created by Smith which had also resurfaced after a decades long absence).