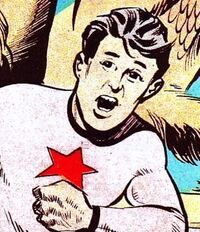 When seventeen-year-old bank messenger Tom Robinson single-handedly thwarted a bank raid, his heroic actions brought him to the attention of a mysterious crimebuster called The Watcher, who kitted him out with various useful crimefighting gadgets and gave him an aide in the form of oversized android butler Mr. Syrius Thrice. They battled numerous villains, including the Spider (no relation to The Spider).

Robinson was undoubtedly brave. Unfortunately, he was also the sort of person who would get into a remote-controlled helicopter sent by a mysterious shadowy individual who may not have had his best interests at heart, and who would point a device that looked like a gun at someone and pull the trigger when he had no idea what would happen. If the device had been lethal, Robinson would have inadvertently killed someone for the crime of bag-snatching.

Robinson originally lived in the north country town of Brickfield, but he and Mr. Thrice later relocated to an island in the Atlantic called Rockfall, where they had a secret base.

The Watcher's notes on Tom reveal that his interests were "football, tennis, cycling and reading." Reading what, we are never told. Football annuals, maybe?

Retrieved from "https://britishcomics.fandom.com/wiki/Red_Star_Robinson?oldid=78539"
Community content is available under CC-BY-SA unless otherwise noted.