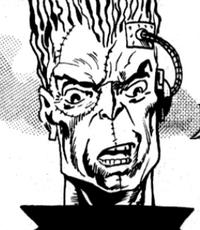 Danny Franks first met Rackman when he was on the ghetto planet Miserere recruiting for the second incarnation of Bad Company. Rackman claimed to be a masochist who was captured and tortured by Krool a year ago and had learnt to enjoy the pain as a way of surviving. He carried a small wheel lined with needles. Half of them were poisoned, and he spun the wheel and pricked himself every morning as a "sacrament to fate." Rackman asked Danny to prick himself, and when Danny survived Rackman decided that fate wanted him to join Bad Company.

Later he was pulled apart by the planet of the Krool Heart, like a medieval prisoner undergoing the torture of the rack, with his arms and legs secured by vines on opposite sides of a widening fissure. Knowing there was no escape, Rackman finally confessed the truth: when captured by the Krool he had in fact been made into a torturer, inflicting terrible treatment on his fellow prisoners. Ever since then he had tried to alleviate his guilt by putting himself in situations where he would be hurt, but it had never been enough: "You can't torture yourself. Not real."

Being tortured by an entire planet was finally a punishment big enough to assuage Rackman's guilt. In fact, it was too big. He asked Sheeva to put him out of his misery and she agreed.

Retrieved from "https://britishcomics.fandom.com/wiki/Rackman?oldid=108600"
Community content is available under CC-BY-SA unless otherwise noted.