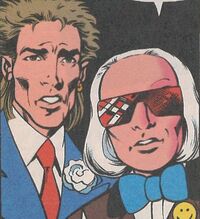 The R.C.X were an intelligence agency set up by the British government to replace the defunct S.T.R.I.K.E. (Special Tactical Reserve for International Key Emergencies) group. Unfortunately, the agency (the members of which included Agent Michael, Agent Gabriel and, for a time, Joshua N'Dingi, later known as Doctor Crocodile) began operating outside the official rules and following their own agenda, attempting to weaponize the mutant children known as the Warpies and temporarily forcing Captain Britain (Brian Braddock) to be their unwilling agent while effectively taking over his home, Braddock Manor, as their headquarters. The Mastermind computer later regained control of the Manor and took over the R.C.X.

The organisation was eventually subverted by a rogue agent and was shut down after a clash with the super team Excalibur.

The R.C.X's encounter with Excalibur occurred in that team's American published series.

Agent Gabriel (real name Matthew) was a former agent of S.T.R.I.K.E and an ex-boyfriend of Betsy Braddock.

Retrieved from "https://britishcomics.fandom.com/wiki/R.C.X._(Resources_Control_Executive)?oldid=111426"
Community content is available under CC-BY-SA unless otherwise noted.