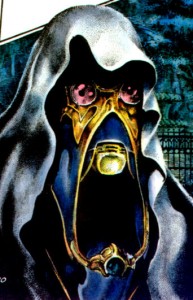 The Qys are an alien race who have developed a technology which enables to create custom built bodies into which they can switch their minds at will to suit the occasion (as a result of which, it is more or less impossible to be sure what they look like in their "natural" state, if indeed they still have one). Their spare bodies are kept in storage in a timeless void called Underspace, which also now contains cellular replicants of several Earth born humans who were given superhuman bodies by the insane Dr. Emil Gargunza after the British Government discovered the remains of a Qys ship on Earth (these superhumans included Marvelman (Michael Moran), his associates Young Marvelman and Kid Marvelman and the psychopath Young Nastyman (Terrance Rebbeck), as well as Avril Lear). For centuries, the Qys (who consider themselves to be primarily a race of artists) have been involved in a state of cold war with the Warpsmiths, but after they and the Warpsmiths began to assist Earth's superhumans in remaking the world following the defeat of the insane Kid Marvelman, Avril Lear brought the war to an end by suggesting that the two sides explore "the erotic rather than the thanotic" side of their relationship (a suggestion which initially was mistranslated as her telling them to "go **** yourselves"). Mors (depicted above), a Qys with a particular talent for creating cellular replicants and for preserving the minds of the dead assisted Marvelman by resurrecting the deceased Young Marvelman, Emil Gargunza (whom he hoped to reform and turn into a productive member of society) and Evelyn Cream'.

The Qys are depicted slightly differently in the Marvelman/Miracleman series' than they are in the Warpsmiths stories. Possibly, these occur at different points in their history.

Retrieved from "https://britishcomics.fandom.com/wiki/Qys?oldid=13659"
Community content is available under CC-BY-SA unless otherwise noted.